Your doctor has diagnosed you as having benign paroxysmal positional vertigo –“BPPV.”

This information sheet has been written to provide you with some more information about BBPV. 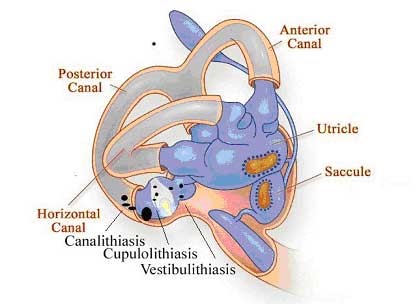 Problems that cause these crystals to loosen include:

However, in many cases, no specific cause will be found.  BPPV is very common, especially as you get older and 30% of the population will have experienced BPPV by the time they reach 70 years of age.

The typical symptom of BPPV is short-lasting vertigo (dizziness), often described as a spinning or falling sensation.  This can be triggered by;

Vertigo may also be triggered by looking up (for example, looking up at the top shelf of a bookcase) or bending your head forwards (for example, bending over to pick up something from the ground).  You may feel a bit sick or you may lose your balance when you experience vertigo.

Vertigo usually lasts less than a minute and does not occur unless you move your head in particular ways.  You may have several attacks of these symptoms per day and the attacks usually come in clusters of a few days or weeks.  In between the attacks, or shortly after successful treatment of BPPV, you may be entirely free of symptoms.

Most of the time, BPPV symptoms will subside within a few weeks without any treatment.  However, in up to a third of cases, the symptoms may persist for months or longer.  An intermittent pattern is common, with symptoms recurring after a time free of symptoms.  Some patients also experience a sensation of imbalance between the dizzy attacks, often described as “walking on clouds.”

Your doctor will have made the diagnosis of BPPV based on:

The most important tests for BPPV are the positional tests; one of these is called the Dix-Hallpike test.  This test involves the doctor lying you down quickly from a sitting position, with your head turned to one side.  The quick movement causes any loose crystals in the balance organ to trigger your dizziness.  The movement helps the doctor decide which ear and which semicircular canal is affected.  Another position test involves lying flat and turning your head to the left and right.  This is known as the roll manoeuvre.

You may have your hearing tested and have other tests of balance function.  Any problems detected on these tests will be treated separately to your BPPV.

The Epley repositioning manoeuvre is used to treat BPPV.  Your doctor will ask you to sit on the couch with your head turned to the side that brings on your symptoms. S/he will then lie you down quickly with your head taken back over the end of the couch and supported by his/her hands.  The doctor will then guide you through a sequence of three more movements over the next few minutes.  These movements are designed to move the crystals out of the semicircular canal and into the utricle, where they do not cause the symptoms of BPPV.

7.     How successful are these manoeuvres and what should I do afterwards?

These manoeuvres work on the first attempt in 70% of cases.  The manoeuvre may have to be repeated a second, and in a few cases, a third time to be completely free of symptoms.  Over 90% of patients are treated after two manoeuvres.

Your doctor may ask you to return to the clinic a few weeks after your first manoeuvre to repeat the Dix-Hallpike test and check that you are free of symptoms.  The Epley manoeuvre will be repeated if the test is positive again.  If your symptoms persist (which is very rare), your doctor may try a different manoeuvre.

After a successful repositioning manoeuvre, you may experience “otolithic vertigo”.  This is a sensation of imbalance, as if walking on pillows.  Otolithic vertigo usually goes away without treatment in a few days – if it does not resolve spontaneously, it can be treated by other exercises.  Your doctor will discuss this with you and refer you to a physiotherapist for advice if necessary.

It is imperative after the doctor has performed the manoeuvre that you:

8.     Are there any side effects and complications to these manoeuvres?

You may experience vertigo and nausea (feeling sick) during the manoeuvre, but this should settle afterwards.  If you do feel sick afterwards, your doctor may give you a sickness tablet for relief.  You may feel slightly off balance and have a sick sensation which should resolve over the next three or four days at the most.

Sometimes BPPV may resolve in one canal but may affect a different canal, in which case another repositioning manoeuvre will have to be performed.  Some patients report feeling off-balance due to otolithic vertigo (see above), which may need to be treated.

Successful treatment of BPPV may uncover an underlying balance problem which will need to be treated with physiotherapy exercises.  Your doctor will discuss any further problems and symptoms at your follow up appointment and refer you to physiotherapy if needed.

Your doctor may give you this exercise to do at home by yourself as a daily exercise for a few weeks as it is common for BPPV to reoccur.

Firstly, your doctor will identify which side your BPPV is on.

Your doctor may advise you to sleep upright for the first 24 hours after the very first Manoeuvre is done.