A cholesteatoma is a benign growth of skin cells that most commonly occurs in the middle ear and mastoid behind the eardrum, and sometimes occurs in the ear canal. As it grows it erodes the ear and can cause a hearing loss, loss of balance, and affect the facial nerve causing facial weakness. If it becomes infected it causes ear pain and discharge and the infection can spread into the brain causing a life-threatening meningitis or a brain abscess. 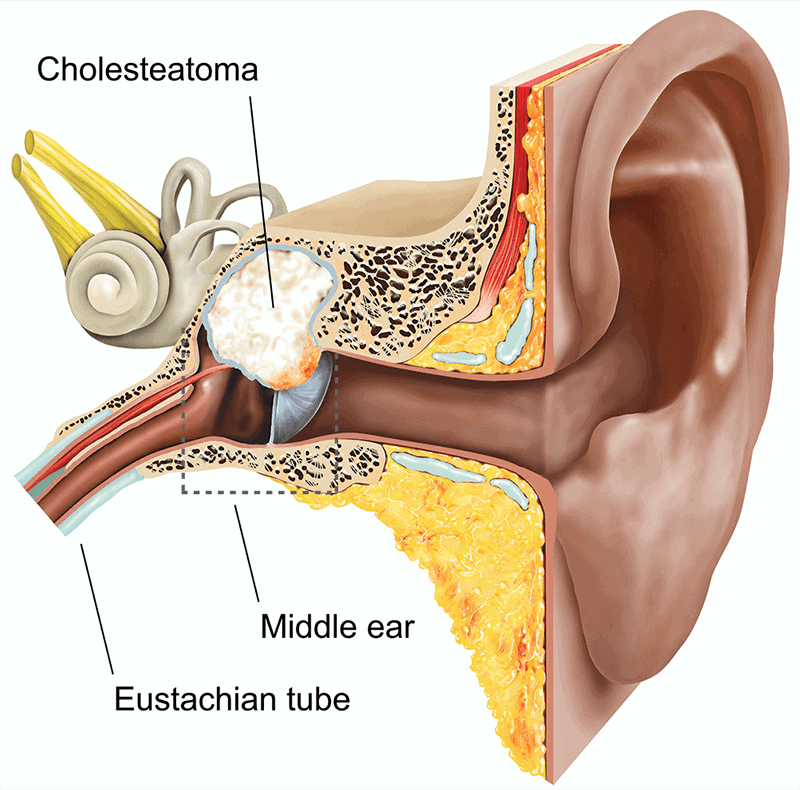 Surgery is the only option to remove it and prevent it getting worse, but in some people regular cleaning and observation may be appropriate.

The types of surgery required depends on the extent of the cholesteatoma and the damage that it has already done. It often requires a combination of the different types of surgery which include:

The cholesteatoma is removed with the involved drum and then a new drum is created with a graft.

If the cholesteatoma is confined only to the superior part of the middle ear (attic) then surgery limited to this area may be all that is required.

The cholesteatoma is removed from the middle ear (tympanoplasty) and the ossicular chain is reconstructed (ossiculoplasty).

First a combined approach tympanoplasty via the ear canal and by drilling out the mastoid behind the ear canal is done, and then the posterior wall of the canal is removed so that the ear canal, mastoid, and most of the middle ear is combined into one cavity. This involves a meatoplasty to widen the entrance to the ear canal.